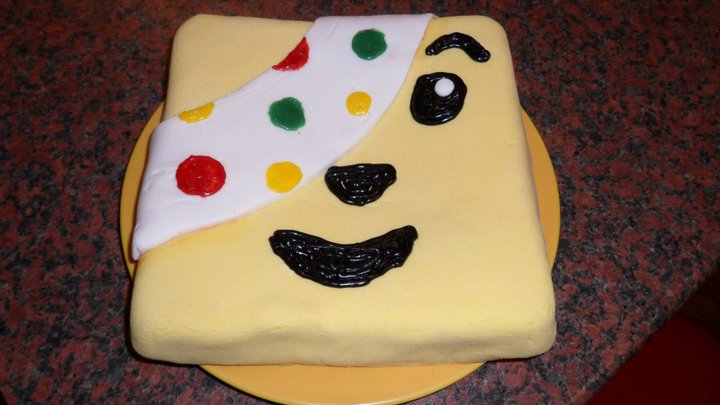 This post is dedicated to a very special yellow bear. Now, I know what you’re thinking, it’s actually Pudsey’s 30th birthday this week with his first Children in Need appearance being way back in 1985, but I’m talking about a different Pudsey. I’m talking about an icing covered Pudsey mess that changed my life forever in 2010.

If you aren’t aware of the back story, let me set the scene. Back in 2005, my mother had died of Non-Hodgkins Lymphoma, a type of cancer. In the years that followed I had been diagnosed with depression, was put on very strong anti-depressants and after two (thankfully unsuccessful) attempts to take my own life, I realised I wasn’t living, merely existing. In 2010 I was recovering from an appendix operation after getting septicaemia when a friend asked if I would bake a cake for a Children in Need bake sale.

I had never successfully baked a cake before and, not wanting to give anyone food poisoning, I thought my best bet would be a packet mix. I bought a ‘Victoria sponge’ mix, a small block of yellow icing and a pack of squeezy coloured icing tubes. When I got into the kitchen, I realised I didn’t have a round tin so used the next best thing, a square roasting dish. It made perfect sense to me!

I followed the instructions to the letter and waited, Bake Off style, sitting in front of the oven. As I watched it rise, I realised I had been smiling the whole time. As back then my depression was at an all time high, this was unusual for me. But I didn’t question it, I just enjoyed it.

The alarm went off on my phone to tell me the cake was done. I put it on the side and let it cool for about 5 minutes before I simply couldn’t wait any longer and turned it out. I remember thinking it had dipped in the middle but didn’t know what that meant and just assumed that was how it was supposed to be! I rolled out the icing and couldn’t quite figure out how to get it onto the cake, in the end I guess I kind of… threw it on. I squished down the edges and caught it and nicked it so many times with my nails. The edges were cracking and the middle was sagging but it was on. I breathed a sigh of relief. I remember feeling ever so clever at cutting out his eye patch and sticking it down with water (that was a guess!) Then, as a finishing touch, squeezy tubes at the ready, I made his facial features and distinct colourful spots.

I stood back and looked at him. Pudsey. My Pudsey. I had felt so proud and happy and wonderful. I thought he looked amazing, perfect in fact. I wanted this feeling every single day.

Five years later and I can honestly say every time I turn on my oven, every time I go to my ingredients cupboard, I still get the same feeling now as I did on that day. Whenever I look at my Pudsey cake, I still feel overcome with pride. That cake started something very special.

So, as fitting on his fifth birthday, I decided to recreate Pudsey. I wanted to make him exactly as I saw him that November afternoon. As my way of saying thank you. I owe a lot to that cracked icing, raw mixture, inedible, wrong-shaped cake. So, happy birthday Pudsey. Here’s to many more years.

See the video below for my TEDx talk where I tell my story in full and Pudsey gets a staring role.