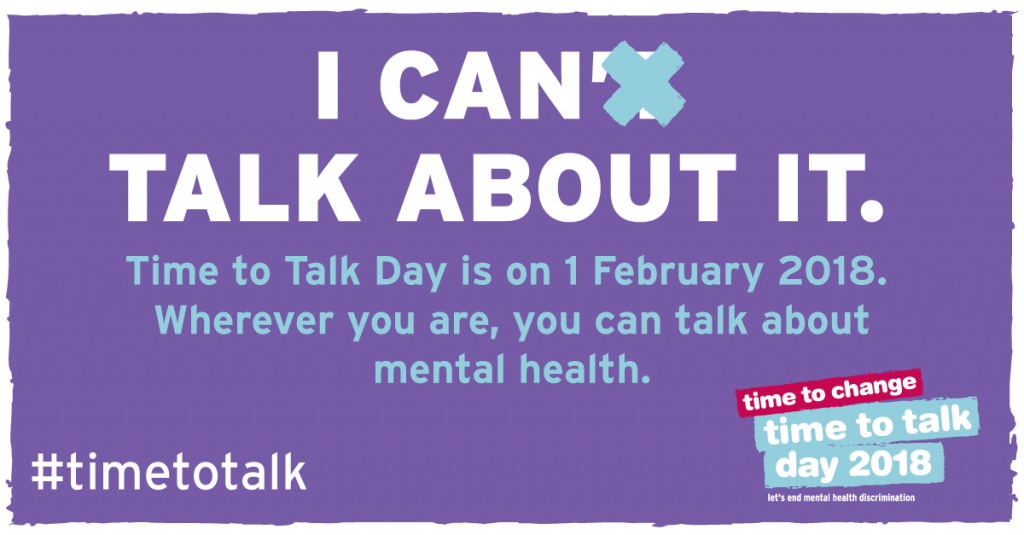 Time to Talk Day, run by Time to Change, will take place on Thursday 1st February 2018.

The aim is to get as many people as possible across England talking about mental health. By joining together on one day, we can break the silence that often surrounds mental health, and show that talking about this once-taboo issue doesn’t need to be difficult.

The aim of Time to Talk Day is to get as many people as possible across England talking about mental health. By joining together on one day, we can break the silence that often surrounds mental health, and show that talking about this once-taboo issue doesn’t need to be difficult. With tens of thousands of individuals and hundreds of organisations speaking out together at the same time, we can make a huge impact and show that it really is time to talk.

Those of you who know my story will know how important raising awareness for mental health issues is to me. (Make sure to check out my article Baking My Way Out Of Depression.)

When I first started baking and long before I started blogging, I was suffering very badly with depression and anxiety. I was on strong medication and I really couldn’t see a way out. I didn’t talk to anyone about my mental health. I didn’t want sympathy, I just wanted to ‘get on with it.’

But I was wrong.

Talking to someone is the most important thing. If it’s a friend, a loved one, a colleague, it doesn’t matter. You can’t keep things bottled up and expect them to go away. I wish I had known that sooner, then maybe I wouldn’t have gone through years of medicated heartbreak.

1 in 4 of us will have a mental health problem. That’s an awful lot. It isn’t something to shy away from. The more we talk about what’s going on in our heads the better. It’s time to break down any barrier, get rid of any stigma and just have a chat.

When I had depression, I can remember being in college and a friend of a friend telling people she had been diagnosed with bi-polar. This was over 10 years ago and it wasn’t spoken about very much at all then. No one knew what to do, what to say. But that’s the thing, you don’t have to say anything specific. I’ve had a few people approach me over the years who knew me when I was at my lowest and openly admit ‘we didn’t know what to say.’ Little did they know a simple ‘are you ok?’ and a good cup of tea would have been a great start.

Now, years later, I want to help change the way mental health is spoken about and break down any stigma attached to it. I’ve worked with Time to Change in a few campaigns now, such as their Small Things campaign last year and now Time To Talk Day 2016 with Good Morning Britain. I’m very proud to be doing stuff with this fantastic charity.

As it’s #TimeToTalk day, I wanted to share this video my fiancé Tim and I took part in with the mental health organisation Time to Change back in 2015.
My mental health has suffered somewhat over the years since I was 16 and whilst I am pleased to say I am in a much better place than I have ever been, the darkness that nearly consumed me and so many other people face every day is nothing to be ashamed or embarrassed of.
The more we talk about our mental health, the more we can de-stigmatise it.
I can remember not wanting to tell my manager at the time that I was in such a bad place. I was scared I would lose my job for fear of looking ‘unreliable’. It was only after I had that initial conversation with him though I discovered how supportive he and the company I used to work for were.
If you’re struggling, please talk to someone.

My partner, Tim, is the person I can talk to about anything. It doesn’t matter if it’s big and emotional or small and trivial, he listens. Sometimes, he knows there’s nothing he can say to help and that’s great too, just getting it out in the open is usually enough. But, we look at what’s going on and try to do something about it.

So, take the opportunity today to start a conversation. Sit down with a friend, send them a text, show up at their door with a pack of custard creams, it’s up to you. It all starts with those three little words: