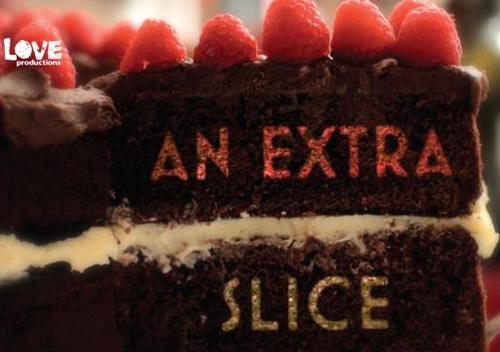 I was asked to bake and bring along a cake fitting to the theme of the Great British Bake Off main show. This week, it was European Cakes! I made a triple layered Ferrero Rocher cake. And here it is; (You have to excuse the naked cake board. A cardinal sin in my eyes, however, it was purely for transport purposes and was transferred to a posh looking cake stand in the studio!)

Being in the studio was very surreal. For those who know me, will know when I was younger I appeared on all manner of TV programmes for one thing or another. I was frequently on CD:UK and SM:TV (for those of you born in the 90’s and after, google it.) and Extra Slice was filmed in the same studio! So being there brought out my inner teenager I’ll be honest.

Colin and I were treated so well by all the studio staff and production people. We got to hang out in one of the dressing rooms until the studio was ready for us, then as part of the ‘Bakers Area’ we got to sit on the cute little tables right at the front. Being front and centre was pretty awesome. We met Jo Brand first who was so lovely and hilarious. Also on the show panel was Richard Corrigan, Fay Ripley and Romesh Ranganthan. And the guests on the show were Diane from this series of Great British Bake Off, Francis Quinn and Glenn Cosby from last years series.

I think the hardest part of the filming was keeping the secrets. Colin and I knew the outcome of Great British Bake Off from Wednesday since Sunday 7th when the show was recorded and after signing an NDA, couldn’t tell a soul! The pressure!! I have no idea how the 12 bakers do it so easily!

We didn’t finish filming until quite late, so the sensible thing to do was have a slice of my cake on the last train home! The recipe for the cake was adapted from this recipe on Let The Baking Begin.

We had a fabulous day and are so grateful to have been part of the whole experience! For good measure, here are a few screen shots of Colin and I on Extra Slice. 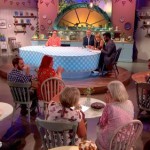 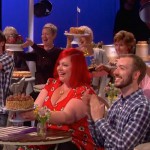 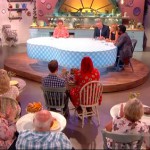 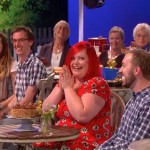