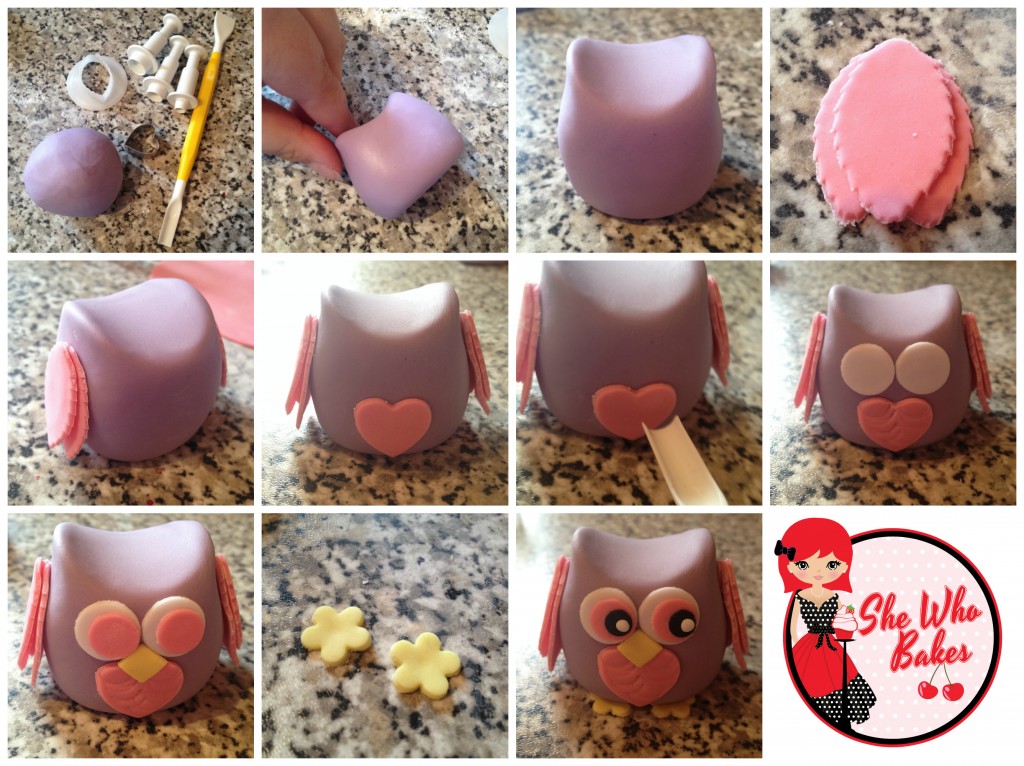 Your desired colour of modelling paste and yellow flower paste.

A selection of small circle cutters.

Edible glue and a paintbrush.

2. Roll a small ball of modelling paste and pinch the top to make the ears.

3. Shape the bottom to sit flat.

4. Cut out three leaves and glue them on top of one another, like so. These will be the wings.

5. Fix the wings onto the side of the owl’s body with a little edible glue.

6. Cut out a small heart shape for the owl’s tummy.

7. Using a smile tool, indent ‘feathers’ onto the heart.

8. Cut out two white circles for the outside of the eye.

9. Cut out a smaller circle in a desired colour for the inside of the eye. Also cut out a small diamond in yellow for the beak.

10. Cut out two yellow blossoms for the feet. Glue these to the bottom of your owl.

11. Roll two small balls of black and even smaller balls of white to finish the eyes and give your own character!

Hope it helps and make sure to let me know on Facebook or Twitter how you get on!

Here is my ALS #IceBucketChallenge! Make sure to donate by texting ICED55 followed by an amount to 70070!

This weekend, I was very proud to compere the live cooking stage at the Feast Festival of Food & Drink in Mote Park, Maidstone. On Saturday 23rd I was joined by Great British Bake Off finalist 2013 Kimberley Wilson and on the Sunday 24th I was joined by Masterchef 2013 winner Natalie Coleman.

Both ladies were absolutely brilliant. Kimberley baked a Lebanese-style Carrot Polenta cake which tasted amazing! The recipe for that bake can be found here. Natalie made two dishes, mussels with bacon, leek and cider and also a blueberry clafoutis. Both recipes can be found in Natalie’s upcoming book, details can be found here.

I also had another Natalie joining me on stage, from Easy Nuh. Natalie showed us how to make a caribbean classic of ackee and saltfish with sweet dumplings. Details of this recipe can be found in Natalie’s recipe book and you can find out more about it here.

As well as the chefs stage, there were pop up restaurants, street food vendors and stalls to satisfy a sweet tooth. There were also a few bars serving local beer and ale, champagne cocktails and alcoholic smoothies.

It was a fabulous foodie festival in my home town of Maidstone  that I am very pleased to say I was part of. Here are a few of my favourite pictures from the weekend. 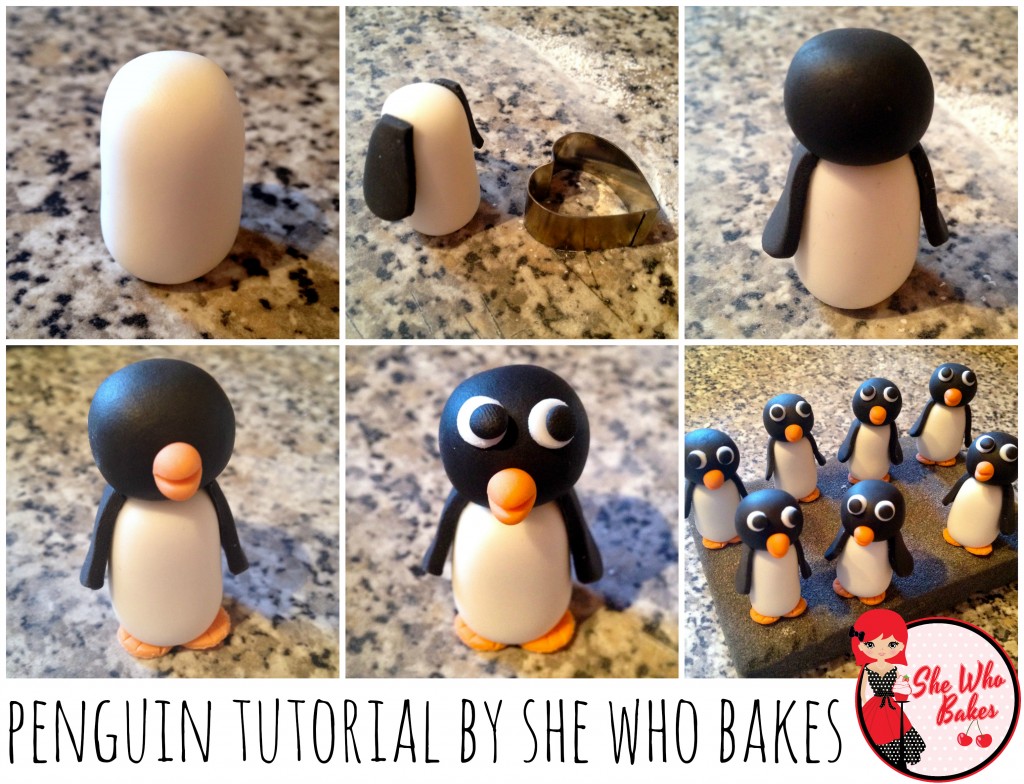 Give it a go and make sure to let me know on Facebook or Twitter how you get on! Oh my goodness!! I have just received the sweetest gift. Belinda Bassett drew me this fabulous picture to congratulate me on hitting 20K likes on Facebook. Thank you so so much! I LOVE IT!!!
(For those who don’t know just how obsessed I am with Doctor Who, which explains the 10th Doctor themed apron and SONIC WHISK!)

Joining me for todays Q&A is the lovely Claire Goodwin! Claire lives in Cheshire, where she works as a speech and language therapist. She has been baking since she was 11 years old. Both her mother and grandmother were wedding cake decorators and her father a chef.

Claire sadly left the tent in week one but left a fab impression with her sweet disposition and bright personality! How has life been since leaving the tent?

As I left on the first weekend, I had the summer to myself really. Previous to the tent you do lots of recipe development once you know you are in the final 12. Prior to that it is all auditions and interviews. A really hectic time really. Between leaving the tent and the press releases a week before the first transmission it was quite a lull really with the exception of filming the final at Welford Hall and the filming of my Extra Slice. During the summer I was able to plan and design my website with a lovely web company and gear myself up for what the production staff kept saying would be the ‘madness’. It was only when the press releases came out a week before that everything started to get really hectic and the realisation of how big all of this was hit me. Even though I went in the first week, I was so proud to have been part of it.

What one memory from being on the Bake Off will stay with you?

I have so many, but one that stands out involves Sue Perkins. When I had finished my Swiss Roll (which did not look like that at home) I stood back and looked at it. I wasn’t happy. I had battled with my ganache splitting and going bitty (I made that ganache five times in the tent, desperately hoping the cocoa content of the chocolate would miraculously deplete each time) I split the bloody thing rolling it up roll and then I had manically started tried to decorate with fondant what I hoped would be a beautiful rustic orange tree and a few leaves and oranges, dusted with lustre dust. Anyway, Sue came over and said ‘Why is there a Claw on your Swiss Roll’, accompanied by Freddie Kruger type movements and a few horror movie noises. I started laughing and joined in with the claw movements. Then, every time I looked down at my horrifying Swiss Roll, I knew I was going home. I’ll send you a pic of it! If you had stayed on GBBO, what week would you have rocked?

A few of them. I had a cracker of a recipe for bread week, which involved stuffing a full English breakfast into a loaf and calling it The Great British Breakfast Loaf. It’s bread week this week so I’m making it. I’ll put it up on my website when I have taken some pics. I really thought my pies were great too. I did a recipe for self saucing puddings that I was particularly proud of which was sticky toffee pudding with a melting penuche centre. I’ll pop the recipe up on my site on pudding week. I felt so disappointed that I didn’t get to show the judges what I really could do!

Do you still keep in touch with the other contestants?

We talk every day. We have our own little virtual chatroom. We also meet up when we can and are going to meet up in September. Also I will be seeing them for the final Extra Slice filming too. It’s been an awesome experience. I have met so many lovely people and all of the bakers I admire individually for differing reasons. I suppose without Bake Off we would be a bit of a Motley Crew but we are a little bit like a family now. What was the best thing that happened during your experience?

I think being able to have the opportunity to write has been awesome for me. The Bake Off has given me a little audience that likes to read my ramblings on my blog posts. There are only a few at the moment, but I am planning to expand my website as much as I can over the coming weeks.

1. What is your favourite thing to bake?

3. What is the best advice you have been given?

Keep talking, no matter how small your problems may feel like they are to others, keep talking.

Baking, to me, relaxes my brain and feeds my soul.”

Thank you so much for joining me Claire! You were awesome and I look forward to seeing what you get up to next!

You can keep up with Claire’s latest goings on at www.baketherapy.co.uk and on Twitter – @bake_therapist

Tonight is bread week on Great British Bake Off! I will be, as always, live tweeting throughout the show so join in the conversation with me here or on Facebook!

Recently in an interview, I was asked what were the best tools to get when you are starting out as a cake decorator so I thought it would be best to list my top 10! Now, I’m not saying I could live without any of my other tools, however, these are the 10 most used tools in my kitchen when I am specifically icing and decorating a cake. What is it? A 16 inch non stick rolling pin.

Why do I need it? It doesn’t leave any marks on your icing like wooden rolling pins and is much easier to keep clean.

What is it? Marzipan and icing spacers.

Why do I need it? It makes sure your icing and marzipan is evenly rolled and to a good thickness.

Why do I need it? Super sharp and well made, this cuts through cakes like butter making it easy to level the tops of your cakes.

What is it? A 10” stainless steel pallet knife.

Why do I need it? Great for spreading onto large surfaces andIt makes lifting up and moving your iced cakes very easy indeed.

Why do I need it? I can’t cut through a cake in a straight line to save my life, so this is perfect for splitting your sponge cakes evenly.

Why do I need it? With the cranked knife, it makes spreading buttercream in and on your cakes so much easier and gives a nice, smooth finish.

What is it? A scriber.

Why do I need it? This little tool is great for marking out spaces on your cake and perfect for bursting any unwanted air bubbles in your icing.

What is it? A wide paintbrush.

Why do I need it? Fab for affixing decorations onto your cake with edible glue and use it dry to brush off any excess cornflour from your decorations.

What is it? Edible glue.

Who makes it? Sugar City (DPM)

Why do I need it? To fix decorations onto your cake. Also good for sticking icing to your boards. (Because naked boards should be outlawed.)

What is it? Side scraper.

Why do I need it? Perfect for achieving a smooth finish when crumb coating your cakes.

So, there we have it. My top 10 tools for cake decorating. Of course… a special mention goes to a turntable and a set of smoothers.

You can find all PME products on their website here, all LVCC products from docrafts, here and Sugar City products here.

Hope that helps and if you have an questions, please don’t hesitate to get in touch either on Facebook or Twitter.

Hello muffins, I’ve had a fabulous response to my Belle from Beauty and the Beast inspired cake. Thank you very much. I have had enquiries as to how I made the drapes around the top tier. So, from me to you, here is a picture tutorial to show you how!

Hope it helps and make sure to let me know on Facebook or Twitter how you get on!